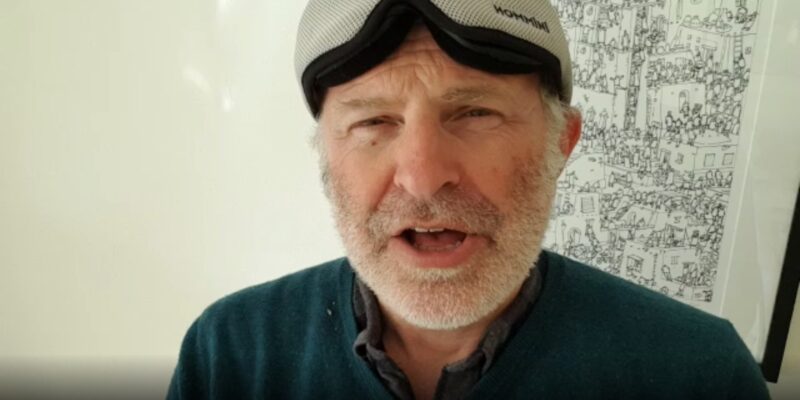 As many of you will have noticed, a previously unregarded weak spot in my business model has recently been identified and ruthlessly exploited by a tiny, enigmatic particle of RNA and fat. No, not him. I mean COVID-19.

Subsequently, my usual source of income – as with that of Opera singers, artisan beard sculptors and licensed escorts – anyone who earned money while being in close proximity to non-family members, in short – has unexpectedly dried up somewhat.  I have decided therefore, to try and weather the storm of the next [REDACTED] months and see if I can’t earn a few quid on Patreon, instead.

Now, I’ll be honest with you. I don’t know much about Patreon. I have previously only supported one on line magazine through these means, but they seem to have done well out of it. Not on my account I should add – they get a dollar a month from me and that level of commitment would be fine from any of you too. But it all adds up. The idea is to spread out, in a manner that is currently all too familiar to us all.

And Patreon seems to be the gold standard for this sort of mechanism.  For comedy stuff, anyway. Only-Fans will be the platform meanwhile for my live, adult only content. Any requests in that line do please let me know.

So, what I have in mind is two-fold. To write new material, of course, be it blog posts or more developed essays, etc – and links to anything else I might be creating on line.

But also, to open up my archive. As in, “Simon Evans has opened up his archive, I’d give it ten minutes if I were you”.  Radio work, Comedy routines, scripts, sketches, articles, journalism – much of it from before I even started stand up, way back in 1996.

I hope that a lot of it is worth reading, and laughing at, in its own right. But anyone who has followed my career with more than utter indifference may also find that there are insights into the creative process, the evolution of certain well known routines, and even some preoccupations that I had completely forgotten about myself. These will all come with introduction, commentary and if appropriate even footnotes. My template is to some extent Douglas Adams’ The Salmon of Doubt, to some extent Stewart Lee’s How I Escaped by Certain Fate, and to some extent Woody Allen’s Without Feathers. So, whether premature death, increasingly tin foil hatted leftism or sex predator-based cancellation await me, in the meantime, I invite you to subscribe now and get an excitingly early number.

All the best, and thank you sincerely for whatever you feel able to pay for the feast that is about to begin. Stay safe and I’ll see you on the other side.  Sx

Jay Richardson reviews The Work Of The Devil under its original title at the Edinburgh Fringe.

Though revisiting some old gags tonight, he’s also adapting Douglas Adams’s theory that there are three ages of technology, depending on your age when each innovation is introduced. At 54, Evans is in his final, fogyish phase regarding self-expression, dismissing the quickening movement to consecrate individual rights at the expense of broader social compromise and cohesion.

Although appealing to the superiority complex of his only-child upbringing, the trend piques his irritability with its excess. His live-and-let-live philosophy is challenged by the huge amount of wasted time and legal fees expended on gay marriages and Christian bakers, not to mention trans-waxing.

Mischievously comparing and contrasting the publicity spin of English and Scottish nationalism – identity politics for old people – he maintains that he’s not trying to change the world, simply reassure his middle-aged demographic as it shifts beneath their feet.

So by way of example, he reprises one of his old pub jokes involving the classic ‘three nationalities walk into a bar’ setup. Flirting with racism in a way that, for now at least, is still socially acceptable, he nevertheless lays claims to a minority dog in the fight, his dad having always loved a mongrel stray after all.

He notes that that the explosion in trans expression has coincided with dropping levels of testosterone across the Western world, and snobbishly bemoans the evolution of football from a fighty, knuckle-dragger’s distraction to middle-class pastime. His tongue is lodged firmly in cheek but getting a little tasty with regard to tribal allegiance and eugenics.

Confessing to some discomfort in the research for his previous show, Genius 2.0, which touched on the nature-nurture debate and the Nietzschean ideal of great intellects raising society up, he evokes the greatest of all in his own field, Billy Connolly.

The Big Yin’s diagnosis with Parkinson’s have afforded Evans considerable disquiet, the centrepiece of his previous hour having been a routine about senior moments, a lovely, circular bit of business in which he relates perpetually forgetting why he went upstairs, reproduced here with added irony.

Worried, he got his blood tested. And he was floored by what came back. But those weren’t the only results waiting for him.

Re-framing Genius 2.0, what comes next is, frankly, jaw-dropping. Though the circumstances it describes will sound vaguely familiar to many, they’re nevertheless barely credible. And yet, entirely of the moment.

With the skill of a seasoned storyteller, Evans has carefully laid his trail of breadcrumbs and gives his humane yarn both the gravity and ridiculousness it deserves, the revelations coming thick and fast as the show approaches its touching conclusion.

You tend to expect a high standard of stand-up from this veteran performer. But in sharing something so deeply personal, he’s exceeded what seemed to be his full potential.

Apparently, Dressing For Dinner has developed over the course of this run. And so, beyond dropping its ill-fitting title, I’d expect it to get even better when it goes out on tour. Outstanding stuff.

“There are a few slower moments you might call lulls, and there is little in the way of texture: Evans’s superior attitude is unflinching, even when it’s misplaced. But the cruellest, most pointed gags are an evil delight.” 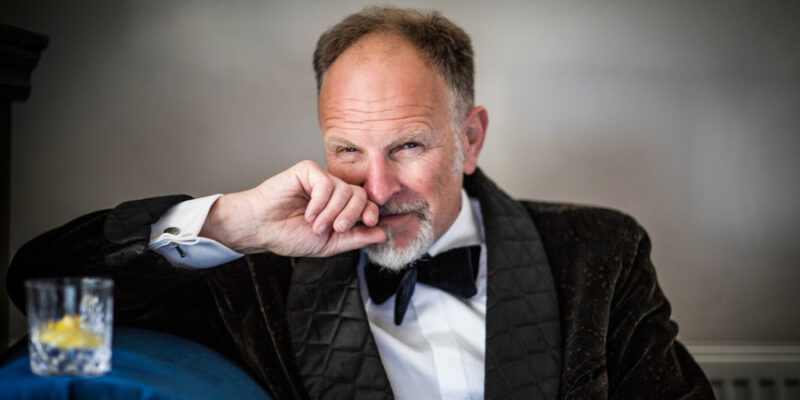 Edinburgh Festival Fringe: Simon Evans does something truly, deeply subversive to an angry, despairing howl of despair at the Descent of Man, at the endangered status of genius, at the way democracy has been reduced to an illusion and at the eye-watering mediocrity of our public figures.

He puts it in a smart suit and tie, he brushes its hair and speaks it eloquently, with literate elegance, between sips of something peaty from a proper whisky nosing glass

This is a masterclass in socio-political comedy. He enters to a blast of The Prodigy’s Firestarter and warms us up with just enough of the most delightful crowd work you will see this month. We are drawn into Simon’s vortex of despair via a discussion of spectacles but before you can say “Mother of Parliaments” he has shredded Theresa May, Jeremy Corbyn, Tracey Emin, Damien Hirst and had a perfect pop at Edinburghers, all without raising his voice.

He reminisces about Kenneth Clark’s iconic BBC series Civilisation and laments at how far we have fallen from a place where we lapped up and feted intelligent TV like that to where we care more about the dental status of the presenter than whether he knows who Ruskin is. But do not think that Evans is offering up some sort of intellectualised amusing Leviathan of a show moaning about the good old days. We get Pornhub and pubes, memes and clownfish, cats and logistical nightmares. We get more laughs per minute than a Corbyn lookalike thumbing through the Guinness Book of Records and quoting John Stuart Mill could ever be expected to create. On the basis of this extraordinarily accomplished hour, I vote that Evans should be allowed to run comedy, the country, the Brexit negotiations, the Royal Family and anything to do with political correctness. The show is called “Genius”. It comes very close

Simon Evans is an agitated Englishman who has come to serve up some scorn and air his collection of grievances at this Edinburgh Fringe.

Evans relays the tale of the treacherous intergenerational politics that raged over a period of years within his family over the purchase of a pet dog. Evans paints for us an image of the battleground that is his family home. Cunning plots, strategic alliances and shrewd manoeuvres employed by his four-year-old, eight-year-old, his wife and himself, each trying to win over the others with their personal agenda, are worthy of the plot of Yes Minister.

Some of Evans’ material is a little trite; jibes about his wife’s untidy pubic region and discussions of women’s mood swings were probably meant to be taken with the faith that we couldn’t conceive of Evans being anything other than an egalitarian. Yet similar material mocking men was notably absent and it came off as imbalanced. Similarly jokes about children volunteering themselves for sexual abuse to paedophiles wants a solid justification that the show lacked to some extent.

This misanthropic man has contempt in equal measure for the past and for the present. He mocks Australians, Americans and the locals in his home town on England’s south coast for their less than classy behaviour. His derision doesn’t come from a place of a sense of superiority – he is also able to laugh at himself, reflecting on the damage he has done to his own face with his knee. He hates audience participation but has a crack anyway.

Evans delivers a good tale and the packed audience was attentive as he built the narrative of how he ended up with a dog with considerable skill.

A solid story teller with slightly dubious material, Evans is entertaining and imaginative. 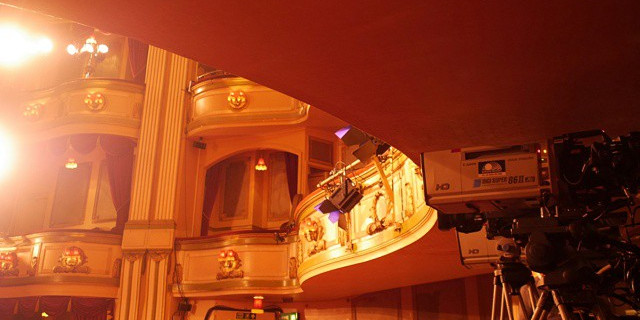 My new DVD ‘Simon Evans Live At The Theatre Royal’ was released in December and has been a STONKING success, garnering many great reviews from critics and the cash-strapped public alike. Just have a search for it on Amazon if you don’t believe me. And google “Simon Evans DVD reviews” for further proof. I can never work out how to post links on here.

I need hardly tell you how much is riding on this. Eighteen years in the making, if I can’t get this one right then the tricky second album syndrome is of no consequence. 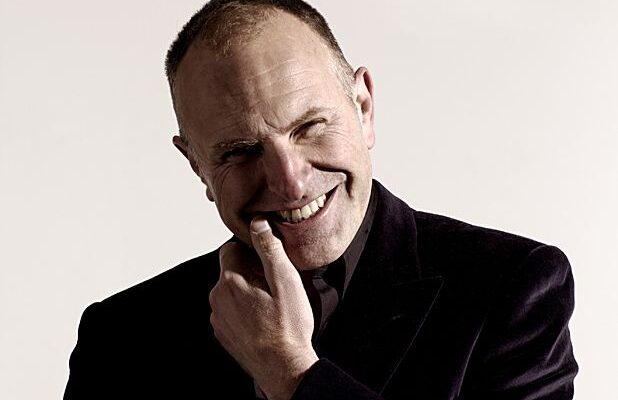 Edwardian London. A Pall Mall gentleman’s club. An erudite, elegantly dressed man in a Harris tweed sits in his sumptuous leather armchair, takes a swig from his 25-year-old single malt and continues his treatise on the scourge of the lower classes.

END_OF_DOCUMENT_TOKEN_TO_BE_REPLACED

“Simon Evans new tour—The Work of the Devil—was first performed as “Dressing for Dinner” at the Edinburgh Festival in 2019 and garnered some of the best reviews of his long career. It sees Evans’ trademark critical glint balanced by an unusually personal, even revelatory tale that has given his comedy an unexpected depth—without sacrificing one single bark of laughter.”

Shows are already selling out, and extra dates being added where possible. Book now!
Background images by Vadim SadovskiPeter Lewicki